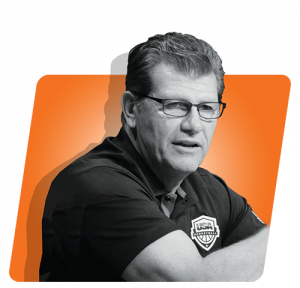 Entering his 37th season in 2021-22, Geno Auriemma has redefined the meaning of success in the University of Connecticut women’s basketball program. During his illustrious tenure, Auriemma has transformed the Huskies into an unmatched program of excellence, which includes 11 NCAA Championships, 21 Final Fours, and 6 perfect seasons. He was inducted into the Naismith Memorial Basketball Hall of Fame and the Women’s Basketball Hall of Fame in 2006. Geno Auriemma also served as head coach of the U.S. Women’s National team for eight years, leading Team USA to the 2012 and 2016 Olympic gold medals. He also led the United States to gold in the 2010 and 2014 FIBA World Championships.