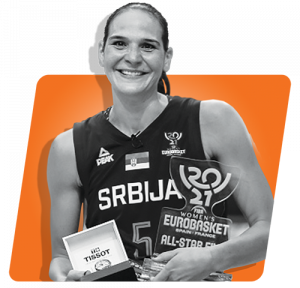 Sonja Vasic is a legendary Serbian basketball player who managed to stay on the highest level for many years. Sonja is a three-time Euroleague champion (2009, 2010, 2015), a two-time FIBA Europe Super Cup Women champion (2009, 2015), a three-time Czech League champion (2015, 2016, 2017), and one-time French League champion (2008). Sonja also played in the WNBA, she was drafted by the San Antonio Silver Stars in 2009, later played for Chicago Sky and Phoenix Mercury. Sonja was part of the Serbian Women’s national team for years and won two Eurobasket titles (2015, 2021), in 2021 she was named MVP of the tournament. She also won a bronze medal in the 2016 Rio de Janeiro Games with the national team. In 2007 Sonja earned Europe Young Player of the Year Award, in 2018 she was EuroLeague MVP and she also earned two-times Serbian Player of the Year Award (2016, 2019). Sonja was the flag bearer of her country in the opening ceremony of the Tokyo Olympic Games, where the Serbian women’s national team finished in 4th place. After 17 years of successful professional basketball in the USA and Europe, multiple medals, championships, league and national titles, she decided to finish her outstanding sports career after the Tokyo 2020 Olympic Games. She continues to be a true inspiration to young players, a true legend.